I’ve started using Lotus Notes ever since I joined IBM in 1996.

Back then, we were still running a package called OV/VM which provided email, calendaring and network filing capabilities. I come from the GUI generation if you didn’t know yet. While I’m starting to appreciate the power of a console and scripting, give me a mouse and a GUI (Windows, KDE, OS X) and watch me fly!

So I was quick to embrace the internal transition from greenscreen to this new Lotus Notes paradigm. Anyway, the point is that while I like mousing around, I also like keyboard shortcuts a lot (this won’t be the last time I contradict myself, so stay focused…)

I think I’ve now been running Lotus Notes without a single toolbar for almost a year. Why? I looove screen real estate. I can never have enough. The only reason I don’t have my Windows Taskbar hidden is because I switch programs too often, and run too many, so the Alt-Tab trick gets old quick. No Konfabulator widgets here!

But I digress… I run Lotus Notes without toolbars because I was starting to get fed up with the way they would cut off, and basically be non-intelligent: they would overlap each other, keep moving all the time (I know they’re contextual), So off they go. I now do most of my action with the Properties Box – something MS Word should have learned from a long time ago.

With a simple CTRL-K, I can bring up all the formatting tools I need, and I can position it in a place that doesn’t bother me. And it stays there! That’s efficiency! 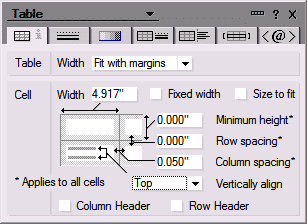 Now, I have the space I can to actually create content. And I find that Notes responds faster, as there is less context to take care of when the focus changes from one item to another.
Publié dans Technologies
← Wireless is fun, after allMoving away from paper… completely →