I’ve been trying to love Evernote. Really. I had it auto-start every time I booted. It sat there in my tray ready to be used, I installed the Firefox extension to send content to it automatically (that worked very well, btw) and I even used it as a DDE target for our telephony software, so it would pop-up for me, as I answered a call.

But I could never get used to the interface (the ticker tape analogy), the search was ok, but the constant scrolling to read my stuff just got on my nerves. And the fact I couldn’t change the theme/skin, arghhh…. that violent blue was starting to get on my nerves (hey, I like subtle, low-key… that’s just me).

Since that thing was really meant to help me keep a record of activities throughout the day (as I have to enter that into a system at the end of every day), it was also seriously lacking the most important thing to me: time keeping. I need to know how much time I’ve spend on a task, and if I’ve entered it in the system or not.

Update: I’ve seen the numerous templates, but none served my specific purpose.

So I fired up an old template of a Notes database I had, sweaked it a bit, and I think I’ve got a winner. By adding a radio button for the record status, and an icon that provides visual feedback, I’m starting to get something. And I’m focusing on the 80/20 rule, so I want to keep this thing as simple as possible. Now, if I can set it as a DDE target as well, and launch a new record automatically, that would be sweet. More remains, but the bulk is in place now. 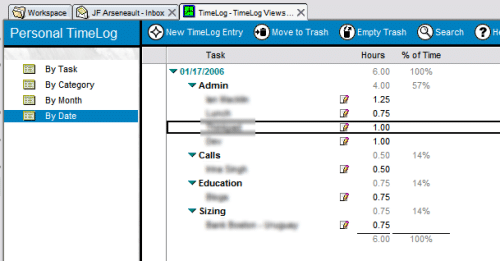 This template originally comes from the Notes 411 website, I’d credit the original author, but can’t find it anymore.

But nonetheless, I think I’ll stick with Lotus Notes for my time keeping. Hey, it just makes sense: I work at IBM and have the software for free (does being forced to use it count?) , I have some app dev skills in Domino and it’s one less app to worry about on my system. Which wasn’t even OpenSource anyway…